Pet vaccinations are no longer one-size-fits-all

“ As all macrocyclic lactones, selamectin acts as agonist of the GABA (gamma-aminobutyric acid) neurotransmitter in nerve cells and also binds to glutamate-gated chloride channels in nerve and muscle cells of invertebrates. In both cases it blocks the transmission of neuronal signals of the parasites, which are paralyzed and expelled out of the body, or they starve. It also affects the reproduction of some parasites by diminishing oviposition or inducing an abnormal oogenesis.

In mammals the GABA receptors occur only in the central nervous system (CNS), i.e. in the brain and the spinal chord. But mammals have a so-called blood-brain barrier that prevents microscopic objects and large molecules to get into the brain. Consequently macrocyclic lactones are much less toxic to mammals than to parasites without such a barrier, which allows quite high safety margins for use on livestock and pets. A notable exception to this are dog breeds that carry the MDR-1 gene defect (see later). ” parasitipedia.net Parasitipedia mentions studies without providing any reference, but I believe they are referring to studies with conflicts of interest.

Studies with Conflicts of Interest

Efficacy and safety of a new spot-on formulation of selamectin plus sarolaner..., 2017
Paid for and carried out by employees of Zoetis, which produce Revolution.

Safety of selamectin in cats, 2000
The study was headed by Pfizer, which used to be the parent company of Zoetis at the time of the study.

Selamectin: a novel broad-spectrum endectocide for dogs and cats, 2000
The study was headed by Pfizer, which used to be the parent company of Zoetis at the time of the study.

Effects of Neonicotinoid Pesticide Exposure on Human Health: A Systematic Review, 2017
“The studies conducted to date were limited in number with suggestive but methodologically weak findings related to chronic exposure. Given the wide-scale use of neonics, more studies are needed to fully understand their effects on human health.”

Human Exposure to Selamectin from Dogs Treated with Revolution™: Methodological Consideration for Selamectin Isolation, 2004
“It needs to be mentioned that selamectin has the potential to bio-concentrate, and therefore, its long-term repeated exposure may pose adverse health risks to veterinarians and their personnel and pet owners.” 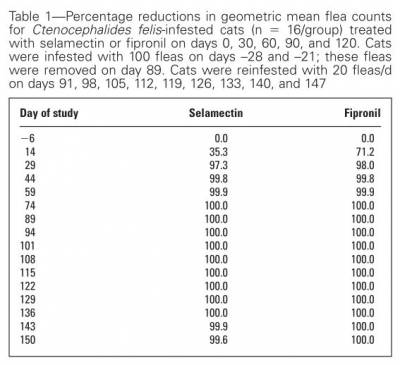 Sourced from Evaluation of efficacy of selamectin and fipronil against Ctenocephalides felis in cats, 2000

It's important to trim your cats claws, as breaks in the skin are more susceptible to infection. Kittens playing with each other can spread the fungus through their claws.

A blacklight can be used to detect the most common form of ringworm. From Wikipedia: “A blacklight (or often black light), also referred to as a UV-A light, Wood's lamp, or ultraviolet light, is a lamp that emits long-wave (UV-A) ultraviolet light and very little visible light.”

When shining a blacklight at a cat, “If the hairs fluoresce a lime green, it is a type of ringworm fungus on the coat. Works for cats or dogs. But the problem can still be ringworm if it doesn’t fluoresce, because there are several species of fungi that cause ringworm and only one of them fluoresces. Purple or white ‘flourescence’ or flakes or skin that fluoresces don’t count: it has to be the green and it has to be the hair shafts.” Andie Lenhard, Veternarian

Hoping ACV would be effective, I searched for scientific literature with the terms: “dermatophytosis” “acetic acid” “feline”

Topical Therapy is often curative in superficial yeast infections (Malassezia, Candida) and may be curative or adjunctive in dermatophytosis. Dermatophyte infections are more difficult to treat because the fungi are relatively protected within hair shafts and hair follicles. Topical antifungal agents kill unprotected dermatophyte hyphae and spores rapidly, but not hyphae and spores within hairs. Topical agents tend to be more effective in short coated animals, for localized alopecic lesions, and in long-haired anials that have been clipped. Many topical antifungal agents are primarily of historical interest and are not discussed in this text. Examples of such products include povidone-iodine, sodium hypochlorite, tolnaftate, Whitfield's ointment (benzoic and salicylic acids), gentian violet, potassium permanganate, and so forth. The interested reader is referred to previous editions of this book.

Focal applications of topical antifungal agents are useful for treatment of candidiasis, Malassezia dermatitis, and localized dermatophyte lesions in dogs and shorthaired cats. …Products containing chlorhexidine in combination with miconazole may be more effective than either agent used alone. [ Spot treatments work best around the head and neck, where cats don't have direct grooming access. ]

Antifungal rinses are the most effective topical products for treatment of widespread superficial mycoses. They have more residual activity than shampoos. … Lime Sulfur is typically applied once or twice weekly for Malassezia dermatitis and every 5 to 7 days for dermatophytosis. Miconazole/chlorhexidine and enilconazole rinses may also be applied once or twice weekly. Another useful rinse for the treatment of Malassezia dermatitis is acetic acid 2.5%. The solution can be prepared by combining equal parts vinegar (5% acetic acid) and water. The solution is well tolerated and particularly useful as a foot soak (5-10 minutes daily) for Malassezia pododermatitis. ”

I'd rather not give a cat medication, because of the side effects. However, the best tolerated one (also recommended by kitten lady) is itraconazole (brand name: itrafungol).

One possible treatment for an ear infection is ACV apple cider vinegar. The paper I found stated “clear distilled malt vinegar” (aka acetic acid) at a ratio of 1:1 with water, in cases of antibiotic resistance. 1)

While the plant is toxic to cats, the gel itself is not. 2) Maybe it can be beneficial as it is for human skin? I found some studies of the extract of aloe vera, but I'm not sure this is quite the same as aloe gel/juice. Search terms used were “aloe barbadensis dermatophytosis”.

One article was for aloe vera juice. It was found to inhibit growth of different species of dermatophytes in agar gel. 3)

The other was for fresh aloe straight from the plant: “Faster cure of the Ring worm was achieved with the fresh sample treatment than was recorded for the fermented Aloe vera treatment.” 4)

I am trying treatment with aloe first, because the kitten seems to tolerate it well, and even likes it as I massage him with my fingers. Perhaps he sees that I use it on myself as well, so it's a grown up thing to do. This is in contrast to Conzol 1% (miconazole nitrate) lotion, which he complains bitterly when I apply, also using my fingers.

I don't see the rave in using other products, considering that in healthy cats, ringworm resolves by itself in 70-100 days. If using pharma or lime-sulfur the issue resolves in 60 days, is that such a big difference?

The first day on the June 23, I used the miconazole nitrate. After that, I've been using aloe vera on subsequent days, once a day, until today July 4th, 11 days later. His hair is really smooth. His condition isn't resolved, but much improved. I can no longer see the bald spots on his head or feel the scaly spots that were around his neck. Some former spots have disappeared. His ears still have uneven hair.

Under the blacklight, I can see some regions that are still infected, but the hair has started growing back. The ears show a trace amount of infection, where before there were dense patches of luminescence.

The research article Processing, food applications and safety of aloe vera products: a review states: “Unfortunately, because of improper processing procedures many of these so called aloe products contain very little or virtually no active ingredients namely, mucopolysaccharides. In view of known wide spectrum of biological activities possessed by the leaves of aloe vera plant and its wide spread use, it has become imperative that the leaf must be processed with the aim of retaining essential bioactive components up to maximum possible limit or as much as contained in fresh leaf.”

I assume the product I am using is ok because it states that the aloe is cold pressed and polysaccharide rich. It's ingredients are: organic aloe vera juice, xanthan, abscorbic acid, citric acid, and potassium sorbate.

Murci's condition has improved. Since the 4th, I have applied aloe every other day, rather than once a day. Under blacklight only faint traces remain, and most areas have disappeared. The arms, which I did not treat, still have significant patches, suggesting that the aloe is beneficial.

Apart from all the reasons given for diarrhea by vets, quite possibly the most common cause of diarrhea in kittens is overeating. Some kittens have a more voracious appetite than others. This appetite serves them well for survival in the wild, but being tended to by adoring humans in the land of milk and honey, they are often given more food than they need, and devour every bit of it, causing intestinal distress. While kittens need a lot of calories to grow up healthy and strong, it is best to estimate the recommended daily serving, using guidelines from the food manufacturer, from rescue organizations, and from your own experience with the kitten(s). With more than one kitten, you may have to be on guard to limit the over-eaters. Lifelong obesity can result: https://www.catsexclusive.com/blog/kittenhood-obesity

“Do not feed more than 6 ounces of canned food per day unless otherwise directed … Remember that it is totally normal for a juvenile cat to act “hungry” all the time. This is more a reflection of the intense predatory drive at this age rather than a physical need for calories.”

An archive of the site nelsonvet.com, recommends a tablespoon of peppermint tea as a remedy for cat vomiting. However, peppermint tea in large amount is toxic to cats.