I want to foster cats, but am trying to figure out how not to emotionally injure them in the long run. Depending on the individual, the pain of abandonment by someone you love, is worse than the pain of living in a cage. How am I going to keep them from bonding to me? I can't adopt every cat I foster.

I hypothesize that young kittens, even those accustomed to humans, have a need for closeness, but are not yet fully bonded to anyone. I got the idea from Chelle Gordon. It would be a sin for those that have bonded for years to be separated.

Felines bond for life: (Caring for a Serval Cat as an Exotic Pet), and will have difficulty bonding again if re-homed. Felines such as lions and cheetahs, form life-long coalitions.

Most humans don't understand cat's capacity for emotional attachment. Cats that have been abandoned, or even those that have been in foster homes, will always remember their previous owners.

In particular one post:
“We've had many cats over the years - ours and foster cats, but only 1 comes to mind for abandonment issues. He was dumped as a kitten, but was adopted by a neighbor. They had him for years and eventually they moved a couple towns over. A few years later, they had to move again and somehow he ended up not going with. Don't know if they dumped him or he ran. Anyway, he showed back up in the neighborhood and we took him in. It took us months to gain his trust enough to get him in the house, but he didn't bond with us. When my brother moved in, kitty bonded strongly to brother and did NOT take it well when brother joined the military - in kitty's mind he had been abandoned again. He'd run away for weeks at a time. When brother came home after training, kitty was LIVID with him, but eventually forgave him. They've been together since.”

“…your best bet is a kitten that was brought up with human care, handled and loved by humans as soon as it was possible to do so up until four months. These are formative times for cats and if they haven’t gotten used to human contact, handling and scent by four months, they’re very likely not going to be able to form a complete trust of any humans thereafter. Even so, that doesn’t mean that they then can’t learn to live around humans but they definitely won’t become the lap kitty that people yearn for.” source

“Adopting is when you intend to keep them forever. Fostering is when you only want to keep them until a new home can be found. I have adopted cats and fostered them. You have to be careful when fostering. If you intend to keep them for a while then find new homes, good luck. There are so many cats and kittens out there that need homes it is often difficult to find proper homes you would really like to leave your babies with. If you only wanted to keep them for a little while only, you are stuck. The other danger is getting so attached that you can’t bear to give them up. You could wind up with way more cats than you ever intended to have. Fostering and giving up a kitten or cat that you have put time, effort and usually money into is hard. I have sobbed at giving up kittens I have bottle fed and gave up because I already had more cats than I could reasonably take care off. I rarely foster anymore because it gets to you after awhile, giving away a cat that you have really come to love.” source

Instructions in Caring for a Feral Mama and Kittens

I did a web search for [ kennel water litter food cat kittens weaning ] and found lots of results, including:

Kittens have been sleeping but are now meowing at the gates. They are ready for hunting. Don't let them out yet. Go get the food ready, but don't let them see it. You may have anticipated The Awakening, because you are running on a cycling schedule of 4 hours. You would have prepared 12 ounces of food, or 1.5 ounces per cat, including my Nuna, the mom cat and kittens. Nuna watches as I prepare, and let her eat whatever she wants from the variety of exquisitely prepared cat dishes. It's bad enough that these vermin have infested her home.

Come back and let the ferocious animals out to run around and pillage the place. Listen for any meowing and watch for any that have assumed the position. Promptly move the meowing or squatting beasts to the litter box. Except for those meowing at your feet, they just want to be picked up to sit on your lap or perch on your shoulder and nibble on your ear.

Don't relax too much, because this is your chance to clean. While you are a kneeling tower, an articulate rock climbing gym, you have some chance of clearing the litter box, cleaning the kennel and changing the linen. The kittens, fifteen minutes into being dragged while grappling the massive wild buffalo, their endurance is starting to wear thin. The staggering prey is gasping, not far from death. 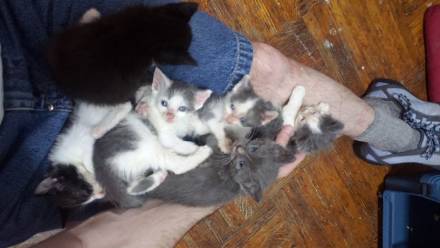 You may be weary, but you must go to the kitchen and bring the food. What is a kittens favorite food? In finer circles it's called more food. The most a bowl can handle is 3 heads. The vocal girl cat, complaining about the lack of space, meows while chewing, possibly the funniest sound you will ever hear. You can tease her by pulling the dish away, to get that delightful meow.

Kittens still want to play, but their motions are indicative of food coma. They are excited about being outside the kennel. Place kittens into the kennel hammock. Move leftovers into the kennel for the feral mom, who has been staring intently at kittens eating, and has a puddle of drool under her chin. Some kittens will join in as well, since their are no more distractions of the World Outside The Kennel, and at this point, the next most exciting thing is food. Besides, mom is eating.

Mom finishes eating. It's bath time. Some hang with mom, some climb into the kennel hammock and have a group licking party. Sleep sets in. There is quiet. Get the finished plates, and wipe the surrounding surfaces.

You can return to your laptop and set a reminder for the next feeding in 3 hours. You can even get yourself something to eat, you deserve it. A little bit of adult time. To your left of your laptop is Nuna, with her head curved around the door, glaring at the foul vermin. 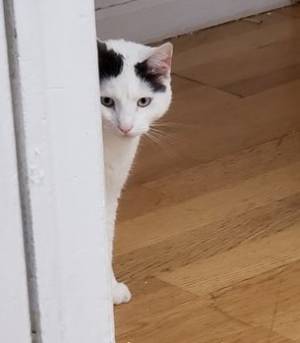 One or two of the kittens may wake and meow during this period, demanding a visit to the massage parlour. If they get feisty, attack with loud smacking kisses to the belly and neck. They may retaliate with some love bites, or just play dead. 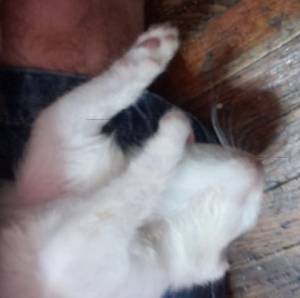 During this time, you may also have to clear the litter of mom cat poo, which stinks to high heaven. Make sure she has finished, and race to get to the poo before her excavations scatter litter pellets into parallel universes.

Sadly, Penguinita stopped eating on Saturday, May 30. On Wednesday she was taken to the vet, and was found to have 3 tumors in her lungs, and beyond hope. Normally you wouldn't wean the kittens as early as I did, but since they seemed to like food, I let them at it. I had no idea that mother was in such bad shape.

If you are fostering, you are motivated to not keep kittens / cats in a kennel, so cats can feel like equals in your home. So there's going to be lots of messes to clean up.