IMO, most automatic cat litters are more trouble than they are worth. You just want one surface area to clean. No moving parts, nothing to break down. That's why most Quora Answers to “the best litter box” has more to do with a simple box and a good choice of litter.

The following litters are made of pine or corn or wheat. Litter media shouldn't contain toxins or perfumes. Cats have a different sense of smell than humans: any added fragrances should be avoided. A lot of commercial clumping litters are not healthy for cats. They are marketed towards ignorant humans.

With either litter, you can deodorize by sprinkling baking soda on top of the litter.

Corn or Wheat Based Clumping Litter

This is the most simple method, although I prefer the following method with the equine pine pellets. Peeing causes the litter to clump, so you can scoop it. Scooping should be frequent. Although the clumps hold together, if allowed to dry for a day, you end up with clumps that have shed a lot of corn-pee-dust. One brand I've used that works well is World's Best Cat Litter, which is made from corn and can be flushed in the toilet. I've also heard of litter made of wheat or walnut shells, but I haven't tried them.

The best litter boxes are large and have high walls, such as the NVR miss litterbox, or a large tupperware storage box with an entrance cut into the long side of the box. Cats align themselves with the cat box to do their business, and if you have one that tends to pee high, it will not be toward the entrance. If you want something that has a roof, IMO it's better to use a small dog house over a conventional cat box, rather than a cat box with a built in roof.

The best cat box with built-in roof is just a tall tupperware container, as seen in this video, where a circular entrance is cut out of the long side of the box. It's best if the box is totally clear, so “the cat can see who's coming, and anticipate what might be lurking on the outside when they exit the box.” This closed box is superior to two piece boxes where the top half seal overhangs the bottom half, and urine can drip through to the floor.

Update: This top entry litter box has a roof with a mesh that reduces litter scatter. As the cat climbs out their paw will step on the mesh. It's best to place the entry towards the wall, so the cat must step on the roof rather than jump out.

You can also use some sifting litter boxes, which include two boxes and one sifter that stack together. You pick up the top box with the litter, then pour the litter onto the sifter and second box stack. Lift the sifter an inch and shake to sift the litter into the box underneath. However, I would only use this outside, because cat litter, no matter how “dust free” it says it is, has always made a dust cloud for me.

This is my favorite litter system, because you only have to scoop the poopsies, but I'll mention a downside first. If you put out both pine pellets and a more fine grain litter, cats will prefer the fine grain litter, because it better satisfies their instinct for digging and covering of their waste.

Equine pellets are used for horse bedding, usually sold in 40 lb bags, and priced at $5.99 at the Tractor Supply. The same stuff is available from other sources at inflated prices. Pine must be cooked or “kiln dried” at high temperature, to remove the pine oils that are toxic to cats.

“I called Tractor Supply and was referred to the vendor who actually manufactured the bag of pelletized bedding… I was told they actually bake it at a much higher heat degree than a kiln, and twice. Which leaves no allergens or oils in the product. It is then pressed reducing even further the above mentioned.” Quote is from a comment below this video. More info here.

I don't think the wood pellets for fuel are the same thing. .

Peeing on the pellets causes them to turn to dust, which can be self-sifting to a lower level under the top level where the cat uses the litter. The litterbox has two levels. The litter sits on the top level, which has a mesh that acts as a sieve, allowing the pee-dust to work its way to the lower level. The lower level can be covered with a dog-pee mat. You still scoop out the poop from the top level. Both you and your cat encourage the sifting process by digging through the litter. Kicking / shaking the box is also effective.

The advantages of this method:

I learned about this method in this video. The video is made by the owner of Victorian Gardens Cattery, which includes links to boxes and supplies that work together well. Recommended by the lady is a height of at least 3 inches, preferably 4, between the sifting surface and the bottom surface. This is accomplished by finding a replacement box that the Breeze box happens to fit inside of and provides the taller clearance.

Alternatively, you can make your own with DIY pine litter box instructions: https://www.instructables.com/id/How-to-build-a-Feline-Pine-self-cleaning-litter-bo
Although, I think that slots work better than drill holes. Also, you will need to glue some PVC pipe stilts to the bottom of the sifter so there is a taller gap between the boxes.

Below is a picture of some stilts in action, on a litterbox called the All Pine Litter Box, which doesn't have enough clearance for more than a few days of litter usage. 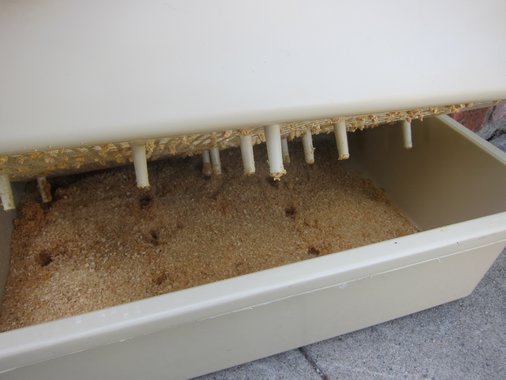 Wondering about the slots in sifting litter boxes, I went to Petsmart, and looked at their sifting litter box selection, which included the Breeze box recommended in the video. The slots are more narrow compared to slots on boxes where the litter is intended to fall through. Even if the pellets don't fall through, I think in practice the slots/holes are big enough that the pellets become stuck and cover the holes. While stirring the litter with the scooper, it will be harder for them to move out of the way for the dust to fall through. Below are pictures comparing the Breeze slots with the other three boxes: 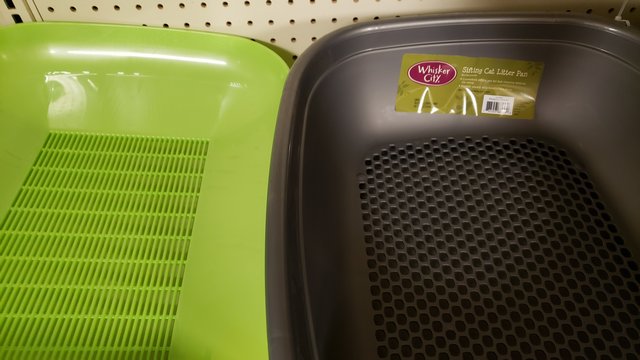 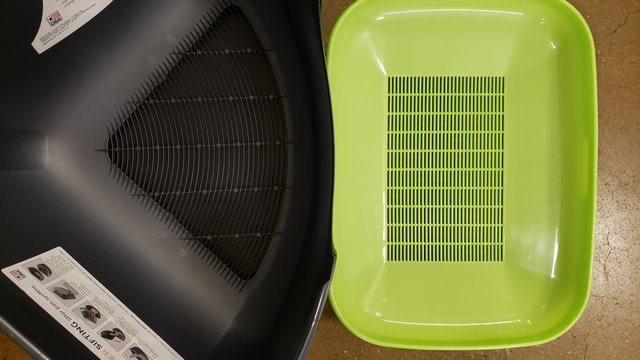 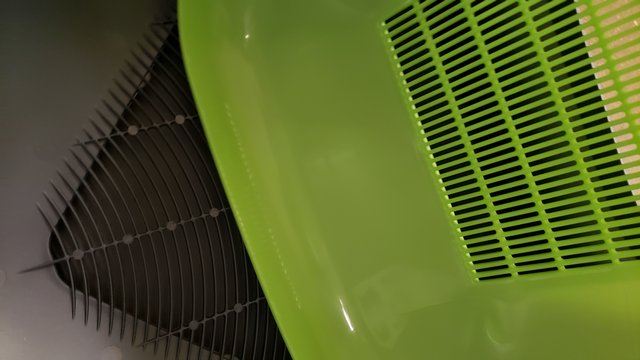 This one is the Van Ness XL sifting litter box, which has holes so big the pellets just fall through: 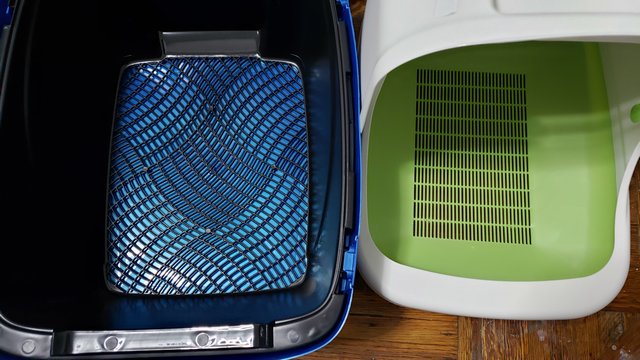 One thing to note, is that the newer version of the Breeze box (pictured above) has slightly narrower slots than the previous model. Although I suspect not as wide as the other boxes in the pictures above. The lady in the video said the older Breeze boxes are better because they sift the pine pellet dust better. My suspicion is that the litter box manufacturer wants you to use their zeolite litter so that they make more profits, so they made something that works less well with the pine pellet dust. However, I am currently using the newer model Breeze box and have no complaints on the sifting. My only complaint is that the box is too shallow when used without the provided hood.

It's crazy how there are so many awesome products we never even hear about. Someone at NYCACC told me about a litter box they got in Europe, and I also found British and Australian manufacturers:
https://www.peeweeinternational.eu/index.php
https://brit-pet.com/collections/our-products
https://www.oz-pet.net.au/cat-loo-info
https://www.catmate.com.au/products

They have many models, and they are made for wood pellets! The Breeze box is too tiny for an adult cat, so it's nice to see larger options. As an aside, my favorite bicycle lock was European, and no one in the U.S. had ever heard about it. If European products can be kept secret, I wonder what other phenomena, such as the news, can also be kept secret.

I got a response from Pee Wee:

Unfortunately we don’t have a distributor in the USA at the moment. Hopefully we will be available in your country soon.

You can maybe contact Pets Gifts, they are a selling point here in the Netherlands and maybe they can help you.

There e-mail address is contact@petsgifts.nl.

Below a size comparison of Exquisicat pine pellets with Breeze box system pellets made of zeolite.

Although the picture on the bags show the same pellet diameter, in real life the zeolite pellets are smaller: 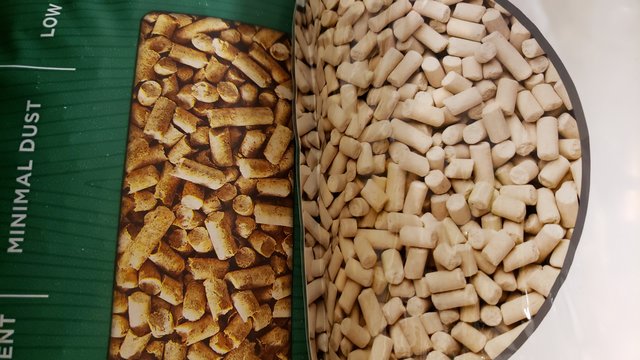 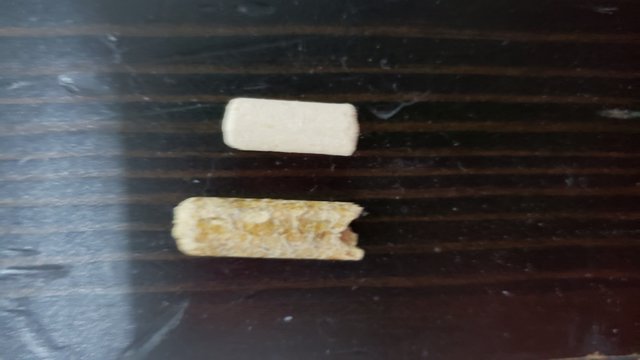 In searching to see if zeolite dust might be toxic, I came across a study. There was no evidence of harm from ingestion. There was no difference in respiratory disease occurrence between the exposed and the control group (the rats were pretty old when examined). MSDS for zeolite doesn't show cause for alarm. So it appears that either pine pellets or zeolite is fine and one can choose what is less expensive. If you are close to a Tractor Supply, that would be the horse bedding pine pellets.