Before taking any pharmaceutical, read this first.

I'm finding studies and articles that disagree with the current trend of treatment, influenced by capitalism, for depression and other afflictions of supposed monoamine imbalance. See in this article review, all the reasons why pharmaceuticals for depression don't make sense, and consider that they have side effects worse than the benefit they may derive. (The article review is based on the 2015 study: Is serotonin an upper or a downer? The evolution of the serotonergic system and its role in depression and the antidepressant response)

Another 2011 study is Blue Again: Perturbational Effects of Antidepressants Suggest Monoaminergic Homeostasis in Major Depression: “ Some evolutionary researchers have argued that current diagnostic criteria for major depressive disorder (MDD) may not accurately distinguish true instances of disorder from a normal, adaptive stress response. According to disorder advocates, neurochemicals like the monoamine neurotransmitters (serotonin, norepinephrine, and dopamine) are dysregulated in major depression. Monoamines are normally under homeostatic control, so the monoamine disorder hypothesis implies a breakdown in homeostatic mechanisms. In contrast, adaptationist hypotheses propose that homeostatic mechanisms are properly functioning in most patients meeting current criteria for MDD. ”

A 2012 article by Shai Mulnari of Lund University: Monoamine Theories of Depression: Historical Impact on Biomedical Research: “ The article argues that the impact of monoamine theories is best explained by the ability of researchers, governmental agencies, and pharmaceutical companies to invoke theories that advance various projects and agendas. ”

Treatment Strategy *if* Depression is a Monoamine Deficiency

MTO is a treatment strategy where you supply 5-htp, l-tyrosine, and l-dopa, in a supposed case that the body's natural physiology/metabolism is altered such that a nutritional deficiency exists, causing lowered level of a monoamine(s). Apparently there are monoamines, and there are trace amines, with the trace amines existing at levels 100 fold below those of the monoamines. I have yet to thoroughly search info on maintaining the balance or of depletion of the trace amines, if there is such articles. MTO may seem speculative to me, but less speculative than applying pharmaceuticals such as SSRI's.

The most common drugs used for depression are SSRI's (selective serotonin reuptake inhibitors). These drugs are generally toxic to your body. They are used as an alternative to just providing more serotonin by supplementing 5-htp, a metabolite of the amino acid tryptophan. Although tryptophan is naturally occurring in food, it's metabolism creates toxic by-products in addition to 5-htp, so taking 5-htp is viewed as healthier. Also, 5-htp only metabolizes to serotonin, whereas tryptophan can take other routes.

Taking 5-htp long term can be problematic. I've done it, and I didn't have any side effects that were obvious (like when I took high doses of niacin and my skin was flushing). The blood brain barrier is a bottleneck in terms of delivery of building blocks to the brain, so 5-htp supplementation can crowd out the other amino acids that produce the other monoamines. Also, there is a feedback loop, such that if the level of serotonin is high, the level of monoamine oxidase is increased (homeostasis). Since the enzyme is not selective of serotonin, it reduces the levels of all the monoamines. So you will be burning the candle at both ends, when it comes to the levels of other monoamines besides serotonin.

Another alternative, is to use MAOIs, monoamine oxidase inhibitors. Monoamine oxidases are a family of enzymes that catalyze the oxidation of monoamines. Taking a MAOI will supposedly raise the levels of all the monoamines. However, I wonder about homeostasis, as mentioned in the “Blue Again” article above. Does the human metabolism have other systems besides these enzymes to keep levels in check? For example, COMT is also responsible for the degradation of catecholamines.1. 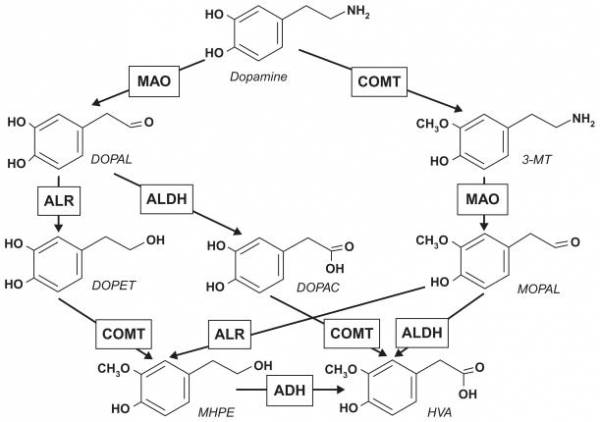 MAO-B activity is increased during aging in the brain of humans and other mammals. 123 “ In this review, we address several factors contributing to a possible role for MAO-B in normal brain aging and neurological disease and also discuss the use of MAO-B inhibitors as drug therapy for these conditions. ”4 “ To the best of our knowledge, there have been no reports of clinical conditions characterized by selective MAO-B deficiency. However, in few cases of atypical Norrie disease (ND) subjects with MAO-B deletion, the latter deficit was reported to result in increased urinary excretion of PEA, but no overt behavioral abnormalities or cognitive deficits (Berger et al., 1992; Lenders et al., 1996). ” BOMOD, 2011

Rhodiola is a herb that, aside from being an adaptogen, is also a MAOI 1 (see also here and here). Although only tested in vitro, Rhodiola should act on both MAO-A and MAO-B. The article “Blue Again” states: “ Of the ADMs, dual MAO-A/B inhibitors exert the most powerful effects on monoamine levels. Due to differences in regional effects of ADMs, many ADMs do not increase monoamine levels when averaged across the whole rodent brain, yet dual MAO-A/B inhibitors are powerful enough to do so (Campbell and Marshall, 1974; Fuller et al., 1974; Renard et al., 2004; Bano et al., 2010). ” I think of adaptogens as being nutrition, which is why I take them as dietary supplements.

So what metabolic systems drive homeostasis? Are they fully known? Probably not. I've been searching, and I found what seems like a good article, but it is behind a paywall: Brain Monoamines, Homeostasis, and Adaptive Behavior https://onlinelibrary.wiley.com/doi/pdf/10.1002/cphy.cp010413

If one can alter homeostasis, then, for example, the bad effects of MAO-B with aging can be curbed. We can also start to consider ways to maximize or tune cerebrum performance. Homeostasis would be governed by DNA programming, and which part of this programming is being invoked (epigenetics). I wonder if there is a feedback mechanism, such that if you alter the default over time, the default balance is altered. Of course, there is also the hypothetical system clock which governs which parts of the DNA is read according to your age. If you could tune the epigenetics to express a younger age, then the MAO-B levels may follow suite, along with other age related factors. Is there one master system clock, or multiple ones running on different schedules according to different inputs?

According to the “Handbook of Physiology”, chapter 13 “Brain monoamines, homeostasis, and adaptive behavior”:

“ Rather than reflect ing alterations in input with high fidelity, monoam inergic systems resist change and exhibit instead a homeostasis of their own (195). Such synaptic homeo stasis can occur because the rate of amine release is regulated, as is the extent to which they can elicit a postsynaptic response.

Monoamine release is regulated in part through homeostatic control over impulse flow. This is achieved both by short feedback loops, which permit these neurons to regulate themselves (4,67,182, 185), and in some cases by longer, multisynaptic feedback loops involving target cells (29, 127, 181; see also ref. 67). Release is also regulated at the presynaptic ter minal, where released amines can act on the terminal and influence any subsequent release (36,53,152). In addition other humoral signals can act on the terminal to modulate release [Fig. 4; (72, 95, 163)].

Despite these feedback loops, transmitter release does change under certain conditions. However, by adjusting the sensitivity of the postsynaptic cell to its afferent input, the ultimate objective of synaptic ho meostasis still can be maintained. Rapid, reciprocal changes in target cell sensitivity during changes in transmitter availability have been described, espe cially in model systems involving peripheral adreno ceptive cells such as erythrocytes and pineal gland cells (89, 122; see also ref. 180). In the brain the primary focus has been on more long-lasting changes, those that presumably involve alterations in the num ber of available receptor sites. Thus it has been shown that a chronic drug-induced reduction in monoamin ergic activity leads to an increase in receptor density [Fig. 5; (14, 30, 48)]. ”

http://digre.pmf.unizg.hr/3311
“ The results suggest that the reduced peripheral monoamine function, associated with cholesterol, is a characteristic feature of personality disorders. ”