Reduction of Blue Light at Night

The circadian rhythm can be influenced by the spectrum of light incident on the retina. By mimicking the hues of light present as the sun's angle with the earth changes, a more natural lighting can be achieved. The most pronounced effect is from the reduced blue light in the evenings. Further reading: http://www.health.harvard.edu/staying-healthy/blue-light-has-a-dark-side

Strategies for lowering your exposure to blue-light:

1. Adjust light from your screens by using these apps:
Flux
Twilight for Android
Later versions of Android have a night mode built-in

4. Rest your eyes by limiting screen time to at least an hour before you sleep

Click here for a collection of links to products that control the spectrum of light:

My eating schedule has been to wait 16 hours after the last meal, and then eat all I want until I go to bed. However, often I stay up past my bedtime, reading or working on projects, and I end up craving a “midnight snack”. In fact, sometimes I want to eat right before bed, because a full tummy is comforting and I like to go to bed feeling satisfied. Also, I noticed I tended to want sweet things for the midnight snack. Which would make sense given this 2010 article in Psychology Today, that concludes eating something sweet before bed increases serotonin. After the midnight snack, the next day is really tough to not eat for 16 hours, since it means not eating until after 4pm or more. I suspected my ability to stay up late was fueled, at least in part, by sugar.

A little googling led me to articles, including a 2014 article in The Atlantic, which states that: “Because we don’t need as much energy at night, cortisol levels decrease, telling our bodies that it’s time to go to sleep. When we stay awake, though, we’re driven to compensate for the resulting blood-sugar drop by eating food.”

A 2013 NPR article reviews a study showing that those who didn't eat late, lost more weight than those who did, even eating the same amount of calories. Yet a 2022 systematic review on Examine.com states that for weight loss, the research is inconclusive on when to eat.

Circadian adaptations to meal timing: neuroendocrine mechanisms, Patton and Mistlberger 2013 says little is known about the hunger rhythm. They don't know if the hunger rhythm and circadian rhythm are related: the sciencealert articles above are drawing unwarranted conclusions. If the two cycles aren't related, then I'm not hurting my circadian rhythm by skipping breakfast and eating a late dinner. –> However, the mouse study in the cell.com article confirms my suspicion that eating a midnight snack could keep me awake longer. ←- I'm going to go by this. If I *have* to have something to eat super late, and I crave sweet, I'll make sure it's a small portion and take it with some glucomannan fiber pills. Here's an image from that mouse study: 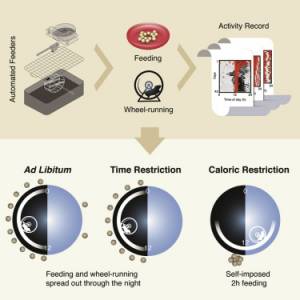 The circadian system, or internal biological clock, may explain why the effects of TRF appear to depend on the time of day. Glucose, lipid, and energy metabolism are all regulated by the circadian system, which upregulates them at some times of day and downregulates them at others (Poggiogalle et al., 2018; Scheer et al., 2009). For instance, in humans, insulin sensi- tivity, b cell responsiveness, and the thermic effect of food are all higher in the morning than in the afternoon or evening, suggest- ing that human metabolism is optimized for food intake in the morning (Morris et al., 2015a, 2015b; Poggiogalle et al., 2018; Scheer et al., 2009). Indeed, studies in humans show that eating in alignment with circadian rhythms in metabolism by increasing food intake at breakfast time and by reducing it at dinnertime improves glycemic control, weight loss, and lipid levels and also reduces hunger (Garaulet et al., 2013; Gill and Panda, 2015; Jakubowicz et al., 2013a, 2013b; Jakubowicz et al., 2015; Keim et al., 1997; Ruiz-Lozano et al., 2016). This suggests that the efficacy of IF interventions may depend not only on weight loss but also on the time of day of food intake. Moreover, these data from circadian studies suggest that combining two different meal timing strategies—IF and eating in alignment with circadian rhythms—may be a particularly beneficial form of IF. We call such a combined intervention ‘‘early time-restricted feeding’’ (early TRF; eTRF), and we define it as a subtype of TRF in which dinner is eaten in the mid-afternoon.” source