I don't like mounting anything on the bicycle unless I'm touring or going for groceries with panniers. It's partly to do with aesthetics: I prefer the clean lines of the bicycle without anything mounted on it. Also no chance of anything rattling going over uneven streets. I like having two different types of locks that I wear on my person.

My first choice is to wear a U lock. I slide it under a leather woven belt between the belt loops of pants or shorts (I've never tried using a holster, as this works fine). However, when I'm in racing attire, with cycling shorts and jersey, I'm not wearing a belt, and don't have belt loops. On one of these racing-attire rides, I may like to stop somewhere for a snack and coffee, and want to lock up my bicycle. So for that I want to have a lock that wraps around my waist.

Waist locks are longer than U locks, which makes them better at locking up more than one bicycle, or locking to larger poles that the U lock may not fit. You can also lock up two bicycles with a small U-lock, but you have to be creative and choices are more limited.

Of the two I like the Messenger Mini better, because it's lighter and can fit around wider poles. You would be surprised that a half of an inch in width makes a big difference (at least for certain poles in NYC). The benefit of the slightly more narrow Series 2 Mini is that it fits between my pant belt loops more comfortably. Though it's worth the trade-off to have the extra width. I still think they are both excellent locks, with the Series 2 Mini being less expensive.

The other difference is that the Series 2 Mini, in its present incarnation, has straight-in locking while the Messenger Mini uses a bend on one end of the U shape to engage the body. There are pros and cons to each setup, which I won't go into. Either way works equally for me.

I wish they would go back to the cylindrical keys. In my memory, they had smoother action, making it easier to lock and unlock than current stick shaped keys. There's a whole story about how Kryptonite screwed up and made the cylindrical keys too easy to pick. They could have made them secure, but they wanted to save a few cents per lock. Had they done the right thing, cylindrical keys would not have a tarnished reputation, and would still be in use today. The current stick shaped keys are sometimes a pain to push in, requiring some jiggling. 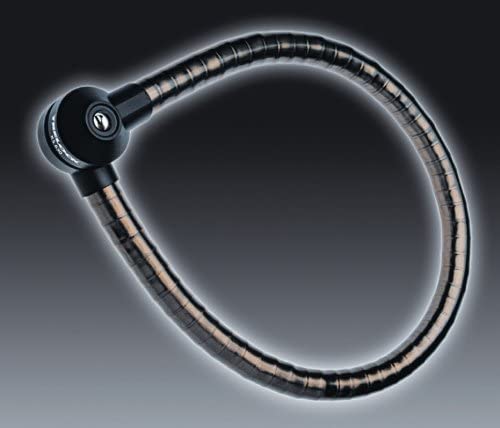 I've tried the Trelock KS630, a 1“ Kryptonite cable lock, a Litelok Gold Wearable, and a Hiplock Lite. These are all locks you can place on your waist or hips.

The Trelock KS630 is my all time favorite lock. It's also the best lock that you can wear on your waist. Too bad they don't make them anymore. It's an armored 1” cable lock, with two cup ends that snap together to lock. Unlocking is also effortless: no need to wiggle the key to get it to go in, as the action is smooth and predictable. You can unlock or lock the lock one-handed.

When it died, I tried replacing it with a Kryptonite version, also a 1“ armored cable, but the Kryptonite was 10cm longer (too loose on my hips), and much heavier because of the bulky and awkward locking mechanism that required a lot of patience to lock and unlock.

Not available retail, I bought a Litelok Gold Wearable, ordered from Europe thinking it would be great. I didn't like it at all. It's too tall compared to the cable locks, yet just as rigid. Takes up way too much space if it were to be placed in a bag. Not as comfortable to ride with because the edges are relatively sharp compared to a round cable or a chain. I sold it on ebay as shipping back to Europe was super expensive.

The Hiplock Lite is what I use now. It's a padlock with a chain. Like the Kryptonite cable lock, it's a pain trying to unlock and lock. It's lighter than any of the other locks in this section, but that's not enough to make it my favorite. However, it's the best waist lock I've found since the Trelock. The Hiplock is even slightly more comfortable than the Trelock, but the Trelock had a badass look to it, while the Hiplock Lite looks a bit dorky.

The ease of locking and unlocking Trelock KS630, it's long length, it's badass look, it's sufficient lightness and comfort, makes it my favorite lock all around.

The mini TiGr Lock weighs less than a pound. I have found two reviews, and I don't know which to believe.

Which brings up the question, just how prevalent are thieves using bolt cutters, or grinders? A pretty good discussion on the topic, at Quora. The conclusion, is that it is rare for a bicycle to get stolen, that is correctly locked with a decent U-lock, or chain. The idea gets tossed around, that the typical bicycle thief is not a “professional”, and doesn't go around investing in good tools for the trade.

However, on Gizmodo, the conclusion is that your bicycle is never really safe, outside, because of portable angle grinders. Common locks eaten through in 2 minutes, and one commenter said a $300 kryptonite lock eaten through in 4 minutes. However, angle grinders produce a lot of noise, and sparks fly everywhere. Very visible, so thieves may prefer a secluded place. Wikipedia also has more examples from Cycle Magazine, and Kassa 3 news show, of how easy it is to get through any lock, using a variety of tools.

Here's my real life experience with the TiGr lock. It may be tough, but it looks flimsy. So the thief tried to twist the lock to break it, using the bicycle as a lever. It was a carbon frame, so the thief damaged the frame. I could still ride the bicycle, but the frame was eventually going to crack (half dollar sized soft spots on the seat tube). I don't use the TiGr lock anymore. I prefer using my Kryptonite Series 2 mini lock, which weighs more but is more comfortable to wear, slid in between the belt loops and my belt.