Variation Based on Genetics and Microbiome

The paleolithic diet focuses on doing just that, with the assumption that we evolved eating the foods that are most nutritious. However, we did not stop evolving 10K year ago. There may be variation in what would be the optimal diet for humans, because there is genetic variation based on culture and individual genomes. Eskimos, for example, are adapted to eating a high fat diet. Greenlandic Inuit show genetic signatures of diet and climate adaptation, Fumagalli et al 20150918 Other individual variations in what may be an optimal diet, is based on an individual's microbiome, especially the gut flora, as there is a symbiotic relationship in processing and creating nutrients.

While there may be variation in optimal diet requirements, this article may seek to start with the average optimal diet and tailor it to suit individual needs.


Organisms Consume Other Organisms for Nutrition

While organisms can create their own energy through photosynthesis or chemosynthesis (see primary nutritional groups), predators survive by consuming other organisms. Predators in this sense, includes herbivores. Humans are predators, consuming both vegetation and other predators.

All life is based on DNA, thus having similar nutritional needs. Predators obtain their nutrition by consuming other DNA based organisms.

The optimal diet for humans, is based on the consumption of plants, fruits, and animals. Refinement from this generalization is on a nutrient by nutrient basis.

The modern diet has too many empty calories: carbohydrates from processed grains and the starchy parts of plants (parts of plants dedicated to energy storage). These foods are detrimental in part because consuming them reduces the overall levels of other nutrients consumed.

Modest research has been done to quantify the optimal levels of amino acids, fatty acids, vitamins, minerals, and fiber.

Phytonutrients and myconutrients, while not considered essential, have benefits which are not fully understood. There may be hundreds of thousands of different types. For the sake of the optimal diet, which ones to take, in what amounts, and on what schedule is poorly understood.

Cooking, especially at high temperatures, creates reactive oxygen species that are carcinogenic, such as AGES, HCAs, and PAHs.

Cooking also changes the nature of the fiber in cooked vegetables, as it breaks down and shortens fiber molecules. Dietary fiber content of commonly fresh and cooked vegetables consumed in India, Khanum et al 2000 There are individual cases where certain nutrients are more accessible in cooked vegetables, such as tomatoes, carrots, spinach, mushrooms, asparagus, cabbage, peppers, green beans, eggplant, brussel sprouts, and kale.

Ideally, I would know on a case by case basis, or which combinations of raw and cooked foods to eat in a day or week. But I can venture that cooking foods is not a requirement for nutrition, and uncooked fruits and vegetables delivers the best quality fiber. I can also venture that low temperature cooking and not overcooking is better.


Grains Are Not Optimal

While some whole grains provide good sources of dietary fiber, there is no reason to consume them. “Grains are not essential, and there is no nutrient in there that you can’t get from other foods.” Grains: Are They Good For You, or Bad? healthline.com

Grains, even whole grains, provide too high a level of carbohydrates to other nutrients. See chart below. Grains are seeds, and seeds contain reserve energy for the growth of a new plant.

Legumes and tubers are also in this jurisdiction.

While ignoring that some nutrients are optimal at a certain dosage, the nutrient density score ranks foods by the ratio of nutrients to the amount of energy a food supplies.

This other related study was funded by General Mills, probably in retaliation to the uprising nutrient density research which was threatening to ruin their profit model, so the results are not credible.

When deciding on inclusion or exclusion of any food, these two metrics are worth looking up. Note I chose the insulin index instead of the glycemic index. 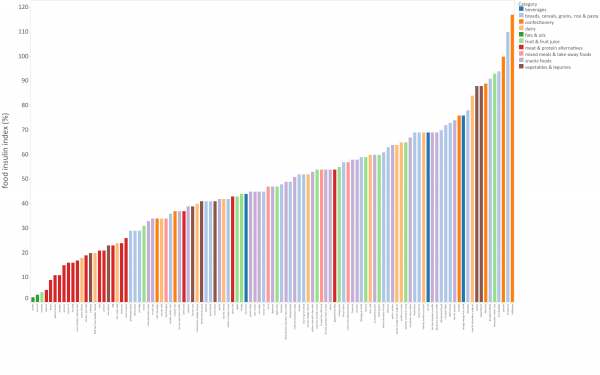 While grains are not optimal for nutrition, you may be seeking additional variety in your diet.

Of note is that oats are about the highest in the fullness/satiety index/score. Steel cut oats, definitely not instant oats as they are lots more processed. Rolled oats without cooking are good as a cereal with plain yogurt and stevia leaf as a sweetener (see zero calorie sweeteners).

Another strange case is that pasta has a low insulin score, even though it is a refined carbohydrate.


What About Hormones in Meat and Dairy?

The evolution of the nutrient composition of mammalian milks, Skibiel et al 20130729
Hormones in Dairy Foods and Their Impact on Public Health - A Narrative Review Article, Hassan Malekinejad and Aysa Rezabakhsh 201506

Dairy can cause acne in some individuals. However, yogurt and cheese does not. “In this meta-analysis we found a positive relationship between dairy, total milk, whole milk, low-fat and skim milk consumption and acne occurrence. In contrary, no significant association between yogurt/cheese and acne development was observed.” Dairy intake and acne development: A meta-analysis of observational studies, Aghasi et al 201906 However, looking at the chart, the precision of the results is underwhelming: 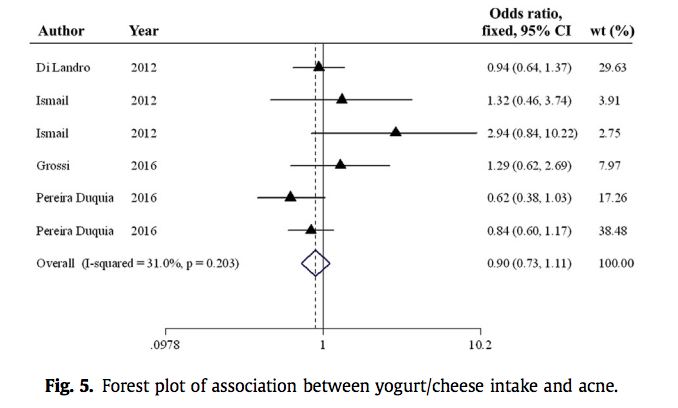 If you have the genetic ability to produce lactase, can you permanently become lactose intolerant if you go too long without having dairy? I haven't found a 100% conclusive answer for this. I have read that persons losing the ability to produce lactase underwent trauma to the intestines such as antibiotics (an epigenetic phenotype). Also, I read some literature that those who quit dairy for a long time, were able to reintroduce dairy slowly, but the statement was anecdotal.

“You can also buy meat that is raised without the use of any hormones. Interestingly, however, the amounts of steroid hormones in untreated and hormone-treated beef are virtually identical. It’s just that the animals that aren’t treated take a bit longer to mature. More to the point, the amount of hormones you ingest when you eat meat is miniscule compared to the hormones produced by your own body.” Coincidentally, fiber reduces circulating estrogen. Monica Reinagel, MS, LD/N, CNS

While the commentary of one professional may not be conclusive, it's what I have found for now.